Working With The FHIR Model

hapi-fhir-cli is the HAPI FHIR Command Line tool. It features a number of HAPI's built-in features as easy to use command line options.

When you have downloaded the archive (either ZIP or tar.bz2), expand it into a directory where you will keep it, and add this directory to your path.

You can now try the tool out by executing the following command: hapi-fhir-cli

This command should show a help screen, as shown in the screenshot below. 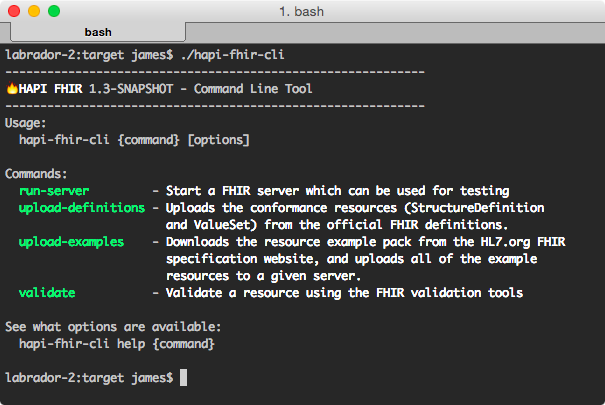 hapi-fhir-cli is available as a Homebrew package for Mac. It can be installed using the following command:

The tool should work correctly on any system that has Java 8 (or newer) installed. If it is not working correctly, first try the following command to test if Java is installed:

If this command does not produce output similar to the following, you should install/reinstall Java.

Individual commands can be troubleshooted by adding the --debug command line argument.

If this does not help, please post a question on our Google Group.

The CLI tool can be used to start a local, fully functional FHIR server which you can use for testing. To start this server, simply issue the command hapi-fhir-cli run-server as shown in the example below: 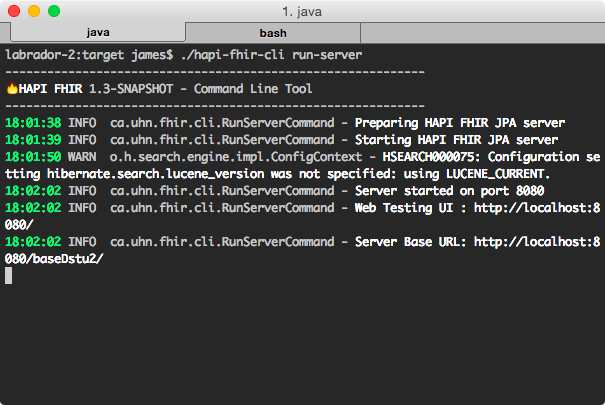 Note that by default this server will not be populated with any resources at all. You can easily populate it with the FHIR example resources by leaving it running and opening a second terminal window, then using the hapi-fhir-cli upload-examples command (see the section below).

The server uses a local Derby database instance for storage. You may want to execute this command in an empty directory, which you can clear if you want to reset the server.

The upload-examples command downloads the complete set of FHIR example resources from the HL7 website, and uploads them to a server of your choice. This can be useful to populate a server with test data.

Note that this command may take a surprisingly long time to complete because of the large number of examples.

The HAPI FHIR JPA server has a terminology server, and has the ability to be populated with "external" code systems. These code systems are systems that contain large numbers of codes, so the codes are not stored directly inside the resource body.

Note that the path and exact filename of the terminology files will likely need to be adjusted for your local disk structure.

The migrate-database command may be used to Migrate a database schema when upgrading a HAPI FHIR JPA project from one version of HAPI FHIR to another version.

See Upgrading HAPI FHIR JPA for information on how to use this command.

The reindex-terminology command may be used to recreate freetext indexes for terminology resources.

To execute this command to reindex terminology resources to a local CLI server, issue the following: